This issue covers the 2016 IR Society Best Practice Awards, with pictures from the event and full coverage of the winners. There is also a feature on best practice in 2017, with articles discussing the political and regulatory landscape. 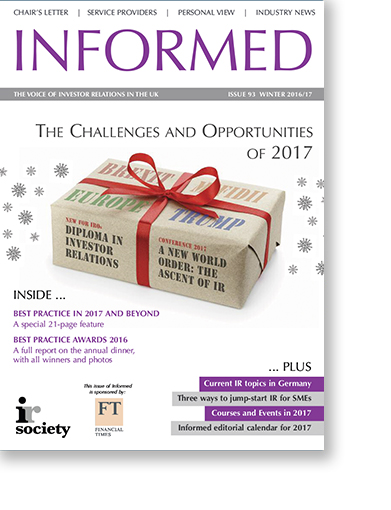 The main feature in the Winter 2016/17 issue of Informed was the 21-page feature, including photos, on the IR Society Best Practice Awards, which was held at The Tower of London in November. Every prize winner and sponsor was featured along with photographs of this fantastic event.

This issue also contains a feature titled ‘Best practice in 2017 and beyond’ which looks at the current IR landscape, in a changing political world, and what is on the horizon for IROs. Articles in this section included:

If you have any ideas for inclusion in future issues of Informed, please contact Laura Hayter.